A super fun week came to a close and I’m saddened that it had to fly by so fast. Even though when we where there it felt like it went by super slow which was awesome sooner or later it had to come to a close.

I got up at 3:00 ( let me just say…..I’m never doing that again)😂 and drove to the airport. It was my first time flying and I think I have found my new favorite way to travel! After a 4 and 1/2 hour flight we where finally in Washington! I mainly listened to music on the plane but I also watched a movie. Here’s some pics of the flight

I loved looking out the window! I never new clouds could be so cool,

I don’t know why I took this picture but I did….I guess I just took it because I was nervous😂

I’m not going to lie when we took off I about squeezed all the blood about of my brother a sisters hands but after that I was fine! So do not judge 😜

When we got to Seattle we had to pick up a RV that we were staying in. Which was super fun by the way. We drove to Mt. Rainier National Park which I slept most of the ride. But the views! Ahhhhh! Its so pretty, everything was so green and all the trees! Also let me just say I’ve never seen so many coffee places. Literally on every corner there was a Starbucks or a coffee cabin. In my defense I only had Starbucks 3 times well we where there! That’s a lot less then I planed! Anyways….

On Wednesday while my brothers hiked Mt. Rainer. Me and my sisters and mom went for a hike on our own. After a lot of up hill, and my calves burning super bad. We finally made it to the water fall 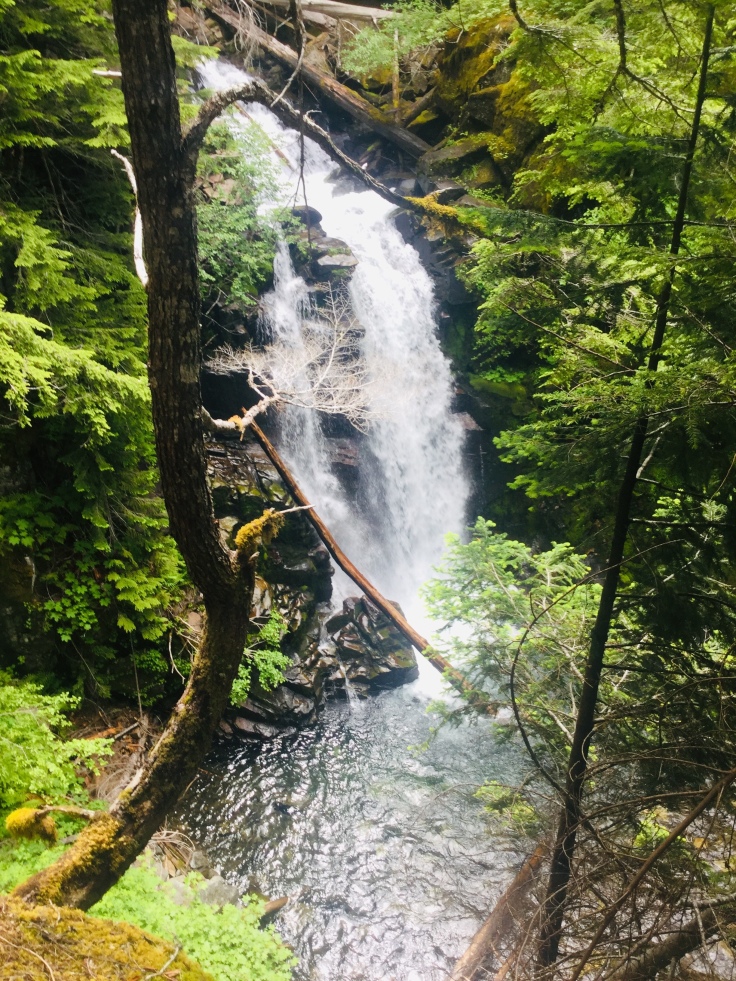 It was sooooooo pretty!

This is another water fall that we found!😍

Yes. I did think this tree was going to fall on me.

Anyway… After we got back from the hike we chilled at the campsite for awhile. I’m also very proud of myself because I got a fire going by myself…and with wet wood!

Once the guys got back we drove up to this place called paradise. You where supposed to be able to see the mountain but it was covered by clouds. In fact we where standing inside a could because we were at such high elevation and so close to the mountain.

We left the National Park on Thursday. But on are way out we stopped at this bridge that had this AMAZING view and I took a bunch of pictures and Polaroids.

We drove to a county park a chilled the rest of the day.

Also I forgot to mention that this was the Fourth of July.

At the campground there was this huge lake and at night a bunch of people shot off fireworks across the lake which was awesome.

Ahhh Friday! This was the real reason we came to Washington! On Friday my cousin got married! The wedding was so fun even though not all the cousins where there! The venue, the food, her dress. Everything was awesome!

I didn’t get any pics of the wedding but here’s one of all the girl cousins that where there.

Saturday involved a lot of walking but was super fun….can you guess what we did?

We went to downtown Seattle! Pikes Place market was where we went to first! It’s sooo adorable!

The first Starbucks is in that….I didn’t go in it sadly but only because the line is ridiculously long.

We walked a lot and saw the Starbucks roastery, space needle, and puget sound. It was amazing. We also got to ride the monorail which was really cool.

After downtown us and our relatives went to a drive in burger place and had dinner!

The day that I had to leave one of the most beautiful states. That’s literally all we did on Sunday drove to the airport waited for others to get there, got Starbucks 😀 and went on the airplane back home.

After a short layover and then a 50 min plan ride we where finally back. But then we had to drive home🙄. All of us where exhausted and by the time I was in my bed, back home it was 2:00 a.m. 😬

This was definitely a trip I’ll never forget! And probably one of the funniest too!

P.p.s. Also I’m sorry that I didn’t post this sooner! This was almost 2 weeks ago and I had another trip two days after! So apologize that this wasn’t sooner!

Hi i’m Ainsley! The creator of this blog! I’m a lover of Jesus, ice cream, and art! Please follow my blog and I hope you enjoy my posts!